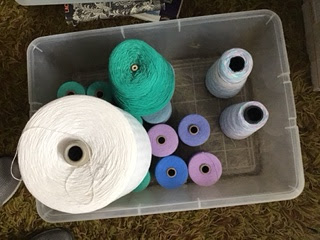 After working out that the dark variegated yarn would only do one warp, I had to re-think the next warp.

I found a cone of 8/2 turquoise the same (or close enough) to the main turquoise colour, but it was nowhere near enough to weave the entire warp.  Then I took a look at a gigantic cone of bleached white and it was also an ?/2 something, maybe 6?  Slightly thicker, but I could make it work on the same warp.

But then some of the accent yarns I had were deemed to be 'too dark' for the paler weft colours and in the end all of those came out and several more mid-range colours were chosen.  And then I realized that with the lighter value weft I could even use the baby mix variegated as the paler values would play ok with the rest of the yarns.

With the darker warp now beamed and threaded, it should not take too long to weave that off, and then I'll put this one into the loom.

The down side of weaving with the softer spun weft is that it sheds a great deal of lint.  And, because cotton is a fairly light fibre, that fibre tends to float around in the air which can then be breathed in.  So I cleared off the bins in front of the square fan that was installed precisely to filter fibre dust out and will run it when I weave these two warps.  I'm already dealing with sinusitis (adverse reaction to medication I take to keep myself alive) and seasonal allergies, so I don't need to further stress my body by breathing in fibre.

I'm really reaching into the 'bottom of the barrel' in terms of my cotton stash.  But I've done so well with using up a big chunk of that part of my stash there is huge incentive to keep going.  There is enough cotton woven up that I'm eyeing the stash of linen, but some of it is so fine I'll need to buy more yarn, OR finally decide to pair that fine linen with 2/20 mercerized cotton.  Which ought to make a nice quality of tea towel.

But we'll see.  It's best not to get too locked into a plan because sometimes you need to make changes.  Do the best you can.  When you know better, do better.  Weaving is a constant lesson in learning from the choices we make, then - hopefully - making better choices.

Email ThisBlogThis!Share to TwitterShare to FacebookShare to Pinterest
Labels: towels

No plans remain unchanged, at least not for me! It’s always a moving pony on the carousel, sometimes the pony even becomes the giraffe! I always have a plan. Change is almost a surety. I do love the colors, you seem to have that color choice ability, inherent or developed, I know not. I can’t wait to see your work in progress and again when finished.

I find wearing a mask - one that fits very well - when I work with any sort of fiber that will most likely float around in the air for a while helps me immensely. The filter vacuum idea sounds great, too - that would take it OUT of the air instead of just filtering the air you breathe. Still....you may find that adding a mask while you work with the particularly linty fibers could help you, too. Love your color choices. Everything you do looks great to me.
StephanieW

I prefer to not wear a mask while I weave. I wear hearing protection and eyeglasses, and with the physicality of weaving, my eyeglasses would fog up. So for me removing the dust from the air is the best practice. It also prevents the dust from getting into the rest of the house. But yes, if not for all of that, a mask would be a very good idea.