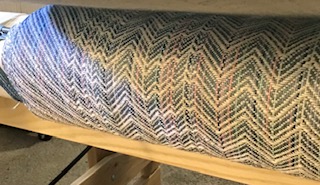 Yesterday I started the second half of the last warp of this series.  I'm pleased with the series overall, in no small part because I used up a lot of yarn along the way.  In the end there are 10 warps in this series, so 160 towels woven in the past few months.  Not anywhere near what I'm used to doing, but what I can manage these days.

Does this mean I'm 'done' weaving?  Not by a long chalk.  I already have the next two warps pulled with ideas for more.  More towels!  Different yarn combinations.

As I work through this chunk of my stash, I see the 'end' of a useable amount of yarn and rather than buy more now, I will be turning towards other types of yarn.  There is a rather large amount of fairly fine rayon to be used up.  I don't much feel like making shawls, so I'll work on scarves.  I should get to that point by the end of summer.  Maybe sooner.  It depends.

For far too many years my goal has been to produce for sale, and I've done that.  Now I have shelves full of towels and some placemats.  Hopefully by autumn shops will be looking for inventory and the local craft fairs will be back.  I need to check to see if the big one is actually going to go ahead or not.  The guild takes a booth there and I will have plenty of inventory for them.  Plus I've been helping with the guild sale in December, and will likely be involved in that, as well.

Over the years I have played with various ways of getting thread made into cloth.  I've ignored techniques that interested me for a number of reasons - either they were too time consuming, or I wasn't sure people would buy cloth in those techniques.  Now that I'm not primarily weaving for sale, I can begin to look at those more time consuming drafts and maybe explore more.  Or not.

But if I can stay on track, the last warp in this series will come off the loom on Saturday.