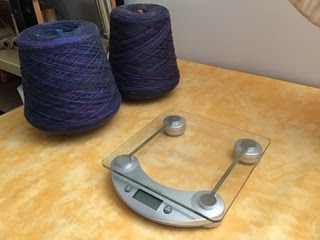 I inherited these two cones of 8/2 variegated cotton from a friend and have been pondering for some time what to do with it.

Being 8/2 cotton it is loosely spun and I didn't feel like using it in the warp, which is my usual approach to working with variegated.  When it is used as weft, variegated yarns can sometimes have the colours 'pool' in not very attractive ways.  But this one has very dark values of all the colours in it and it shouldn't look too bad as weft.  Or, at least, that's the theory!

So I planned a warp of mostly dark value colours, the same as in the variegation, in my 'usual' approach - a mixture with no particular stripe sequence.

As I planned this warp I kept in mind that the colours will blend most thoroughly in plain weave, but I didn't want to weave exclusively plain weave because that isn't the most absorbent.  So in the end I decided to go ahead and use 20 epi, over 16 shafts, with a fine line of twill with plenty of plain weave.  The pick count should be around 20, and the line of twill should improve absorbency.

As I worked through the details, I wondered if the two cones would actually do more than one warp so I planned another combination in case there was yarn left over.  And finally, last night, late, I crunched the numbers.  As in, do the math!

So now it looks like these two cones will provide weft for about 18 towels, which is about what I get off a 20+ yard long warp.

Since the yarn is very loosely spun it will produce a lot of lint (I know this from having used other 8/2 yarn from my friend's stash) so I am going to clear enough clutter off the shelving unit beside the loom so I can run the filtered fan.  The filtered fan was installed as a way to reduce the cotton lint flying around in the air about my head.

But I expect that by the end of this warp I'll need to do a bit of a clean to get rid of what settles on and around the loom, including the stuff on the shelves beside the loom.

The back up warp will be used for the cotton boucle that still needs to be used up.  I haven't decided what weave structure to use - yet.  Perhaps a variation on what the current warp will be done.  But both warps will need to have some experimentation done once the warp is set up so I can determine actual ppi and adjust the treadling accordingly.

Or I can use some of the other 8/2 cotton I have, from the same friend's stash and maybe get rid of more of this very loosely spun yarn that will make good towels, but will cast off fibre.