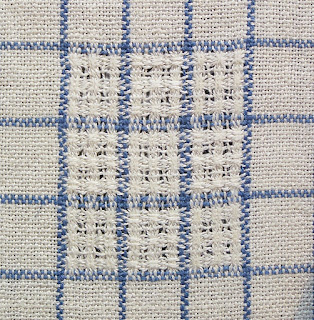 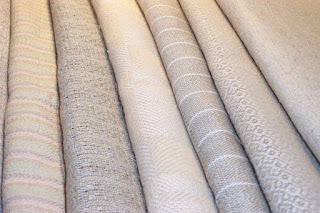 Linen is a wonderful fabric in so many ways, although it does have its quirks.
Linen comes from flax plants.  The fibre is from the stem of the plant - called 'bast'.  Other plants also have bast fibre and some of them provide fibre that can be harvested and spun to make yarn.  For example hemp, nettles, ramie and so on.
As a crop, flax is challenging, as is the fibre to spin and weave, requiring much labour to harvest the fibres, care in spinning it and then in the weaving of it.  But it also requires careful wet finishing.
The top fabric was woven for Magic in the Water, the bottom was produced for a short run publication I called A Good Yarn; Linen.
I don't much like using linen as warp because I live in an area with relatively low humidity and linen really behaves much better in higher humidity conditions.  But once wet finished, the selection of samples I did for the short publication really turned out well.  All of the samples woven for A Good Yarn were done on the Leclerc Fanny (counter balanced loom).  I also did them in the spring/summer when the relative humidity was higher than it is during the winter.
Magic in the Water can still be purchased, but with photos only, not actual samples.  Unless you are lucky enough to find an older weaver downsizing and selling off their library.  But the information on wet finishing is still relevant, so I took photos of all the samples for Magic and produced a publication in 'magazine' format which can be purchased from blurb.com.  Or you can get the PDF - blurb sells both.
For my Zoom study groups, the 11th lecture will be on wet finishing, of course it will.  It is the final step, so to speak!  And still not well understood.
A lot of people don't use the term 'wet finishing', just say 'washing', but the wet finishing process can be quite different from simple washing - especially when it comes to wool.
The final step in terms of weaving with linen is the compression.  Linen is a very dense fibre and the heavy compression involved in wet finishing really makes the cloth.  It is through the flattening of the yarn that the shine we associate with linen begins to happen.  Without the compression, the cloth remains rather dull.
Understanding the fibres/yarns we work with means we can make appropriate choices.  Like using linen for warp when the relative humidity is high, not low.
Currently reading Castle Shade by Laurie R. King
Posted by Laura Fry at 10:28 AM

Email ThisBlogThis!Share to TwitterShare to FacebookShare to Pinterest
Labels: Magic in the Water