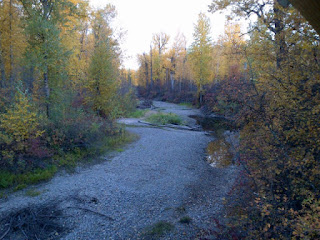 This is a photo from a park within city limits of my town, taken one autumn not long ago.  The little waterway that fills earlier in the year making a 'path' from one river to the other and a little island of the land to the left is mostly dry as the water level goes down.  Right now the park is closed due to spring runoff/high water and some of the low lying homes near the rivers are under flood watch.

I've lived in this town all my life.  I am well aware of the cycles of the seasons.  It is comforting to watch the transitions of one to the other.  It is home.

Since I was very young I have read, avidly.  I mostly read whatever books I could get my hands on and I read pretty much indiscriminately.   My mother gave me free rein to read pretty much whatever I wanted to read (although I'm pretty sure she would not have approved of Fanny Hill - even though I found it distasteful and didn't actually finish it).

If a book caught my attention on the first page, I pretty much read it.  If it didn't, I'd set it aside.  \

It was only years later that I found out that the library phoned my mom and asked if she knew what sort of books I was taking out and if she approved!  She did and I never knew until I overheard her telling a friend.

Many of my teachers approved (or didn't disapprove) of my pulling out a book if I'd finished my classwork before others did.  And so I continued to read, everything and anything - fiction, non-fiction, it didn't matter.

As it happens, I still do.

I don't remember when I heard the phrase "May you live in interesting times" and had it described as a curse.  I remember being taken aback by it, then understanding the full intent of it.  Because much of what I read about was people, living in 'interesting' times.

I have no idea what societies (because there are many) will look like in the next few years.  But I do feel as though we (human beings) are poised at the peak of changes.  Will they be good changes?  Will they be helpful changes?  Will they be welcome changes?  The answer to those questions will vary according to the person.  And just as with the seasons, human beings will go through another watershed as we navigate the current 'interesting' times...

Currently reading Can It Happen Here? by Michael Adams.  Written in 2017, I'm going to go to his website and see what he is observing now