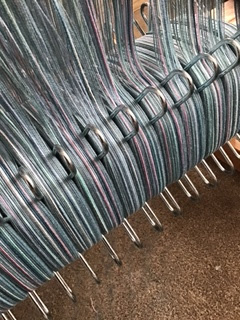 So this is the 10th warp in the current series.  It is 2/8 cotton at 20 epi.  As such I was having some issues with beaming these warps.  No matter how hard I tried, the bouts didn't seem to go onto the beam well - not even/level in the section.  This lead to mild issues with tension as the threads, especially at the edges of the section, went on differently than the middle.  Hard to explain, but I'll try.

The number of ends in the section and how I spread them out in the final reed of the tension box were too narrow.  In an effort to keep the 'ribbon' of yarns going into each section flat, the edges of the ribbon were not building up at the same rate.  The yarns piling up in the middle also had to go on top of the cord that attached to the bout to pull the ribbon into the section, meaning the middle of each section built up ever so slightly higher than the edges.

In the end, when I cut the towels apart and wet finished them, all evidence of this tension/length issue disappeared but it annoyed me that I wasn't doing a better job.

Over the course of the series I have, several times, adjusted how I filled the last reed in the tension box and on this warp (the last or second to last in this series) I think I may have finally figured out how to better spread the yarns out.

Of course I have other warps planned that will use the same yarn at the same epi, so I will have several more warps to test out this approach.

The slight difference in build up was made worse due to the small circumference of the beam.  Every little inconsistency was magnified as each rotation was about 15" instead of the 36" I was used to on the AVL.  Any slight discrepancy on the AVL had more distance to even out.  I will find out when I begin weaving this warp if I've cracked it.

Persistence.  It's a thing.