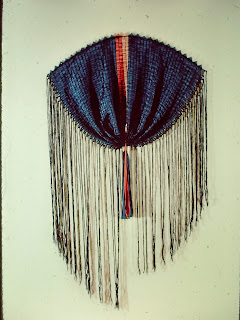 I wove this piece back in the mid 1980s for the one (and only) solo art exhibit I had.

At the time I was trying to find my way in terms of my creativity and the need to earn an income.  I was also dealing with some pretty severe (undiagnosed) allergic reactions that were making my life some kind of hell.

I forget how many pieces I wound up making, some of them very large, some of them smaller in terms of weaving, some of them from fine yarns, some of them - like the above - using thicker.  I can't remember the title I chose for this one - Flight or Flying Free, based on the kite shape.  The warp was a fairly thick tow linen, the weft was 1" grosgrain ribbon.

The intention was to have the fringe be even, but when I'd finished knotting the fringe and hung it up (there is an armature holding the top) I liked the asymmetry and left the fringe as was.

It was through this exhibit that the use of a butterfly and flight became a theme, and as a result I adopted the butterfly as my logo.

One of the high school English literature teachers brought all his classes to the art gallery and their homework was to write up their reactions to the exhibit.  They also left thoughtful comments in the guest book and I found it interesting that so many of these teens seemed to instantly understand what the exhibit was all about, while so many adults didn't.

An artist I'd become quite friendly with grabbed me during one of his visits (he said it was the third time he'd been) and quizzed me about one piece in particular - said it broke every 'rule' about making art and somehow...worked.

In the end I analyzed the amount of time, effort and actual money I'd invested in the show and decided that trying to make textile art was not going to put food on my table and carefully boxed up the pieces and put them away.  I still have some of them.  The above piece was traded for a piece of turned wood so it moved to a new home.  Another was gifted to someone in return for a service they provided.  I had hoped to donate the one I feel most satisfied with to another arts group but then the pandemic hit.  So it still lives in the box in my studio.  Another is hung in the back of a closet.  Or was.  I might have found a home for it, I can't remember.

Textiles have played every role in society/culture - from survival through to decorative, to political, religious, ceremonial, etc.  Artists have used textiles to express every emotion and today?  Today we have the ubiquitous t-shirt with the slogan du jour.  I even wear some.

Textiles are so common we don't think about them - how they come into being or where they go when we throw them away.

I will be back in a few days with a book review.  Initial reaction?  By the end of page 2 I had already decided I needed it in my personal library.  A copy is waiting for me to pick it up from the local bookstore.  In the meantime, I thoughtfully chew through the library copy.