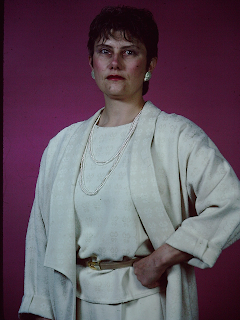 Hard to believe that is me.  Significantly younger.  I'm wearing a silk outfit I wove and had sewn and wore too little to justify the expense of making it.  I kept 'saving' it for 'special' - until I out grew it.

I've been thinking - a lot - about my younger self.  There is a 'thing' on Facebook that asks what you would tell your younger self if you could.

I'm not sure I would have any message for the me that was me when I was in my 30s.  I was pretty bull headed, as my mother would put it.  I'm not so sure 30 year old me would listen to 70 year old me.

Have I had a 'perfect' life?  On no.   Hell no!  Have I had a life of challenges?  Hell yes!  Have they been worth it?  To be determined, I suppose, by someone other than me.

I am a master weaver - even have the piece of paper that says so.  Does that mean I never make mistakes?  Hell no.

This week I have been working through a complex project on behalf of another weaver/designer/teacher and it has been...challenging.

Part of doing that is re-interpreting the data and coming up with a way of looking at it that makes sense to me.  So I reviewed the draft, made some adjustments, wound the warp, then beamed it.  Yesterday I threaded the warp and discovered I was short 3 ends on either side of the centre stripe.

So I wound three ends onto a bobbin and threaded them in where they belong.  I don't think it will work to leave them all on one bobbin, but right now the two bobbins are containing the ends so that I can finish setting up the loom.  Then, if necessary, I can separate them and hang them individually.

Mastery doesn't mean you don't make mistakes.  Hopefully you just recognize them when you make them and can figure out a way to fix them.

And please.  Don't anyone tell me I should have smiled.  I was then (and am still now) experiencing chronic pain and that day I was not feeling well.  I was just managing to hold things together and was, frankly, exhausted.

But being bull headed, I was determined to do what needed to be done.  And that, I think, is worth remembering when I look back on my life.

I survived - as a weaver in the 20th and 21st centuries.   And I will continue to weave for as long as I can.  Perfect, or not.