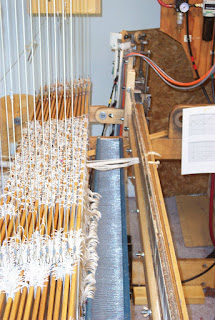 It doesn't do to get complacent - that's when you stop thinking.

This warp is 36 epi.  I have a 9 dent reed, but it's very old and rough on the top and bottom so when I checked my stored reeds I noticed that I also have a brand new metric reed (35) which is also 9 dents.  Without thinking too much I popped that reed into the beater and proceeded to sley it.  The entire time I was sleying it I did not once stop to ask myself why I hadn't been using this reed, but the old battered one.  Or if I did, I didn't take the time to properly answer the question.

Turns out that the reed is too 'short'.  When I put the beater top back onto the beater, there was a 1/2 inch gap between the reed and the top.

Now, you may be asking yourself how it is possible for me to put the reed into the beater without putting the top of the beater on.  The answer is simple.  On the AVL, the bottom of the reed is 'pinched' between two pieces of wood.  And, since the beater top is rather large and blocks the view in order to sley, I leave it off while I do that job.

I really dislike having to change reeds and resley because all my nice neat little bouts which I so carefully tie into slip knots are now gone and the danger of making sleying errors is much, much greater when the warp ends are all loose.

How to do this when the AVL doesn't really have side frames that the reed could lay on?  I grabbed a couple of short lease sticks (for the Leclerc Fanny or other smaller loom) and rested them on each side of the loom across the bottom of the shafts and onto the side frame of the loom.  And taped them there.  The reed rests quite comfortably there and it's only taking me a few minutes to pull each group in it's order and put it into the reed which is clamped in the beater.

If you click on the photo you should be able to see the set up more clearly.

Once the reed is completely re-sleyed I'll carefully pull the reed out and remove the sticks and then I can go ahead and put the loom back together (the sandpaper beam is also out of the loom), tie on and ought to be weaving this afternoon.  :)

And I can be pretty sure there are no sleying errors to fix.  But just in case, I'll be sure to check each shed.  Doesn't do to get complacent!

Currently reading Snuff by (Sir) Terry Pratchett
Posted by Laura Fry at 11:55 AM

Been (nearly) there. Done (almost) that. Several times, alas. :P My sympathies!

I've found through trial and error (mostly error!) that, if the reeds aren't waaaay too short and the grooves in your beater are deep enough, you can sometimes get away with putting a thin dowel under the reed and/or putting something between it and the top beater bar to hold it in place.

The reed currently in my Minerva is loose - not quite short enough to flop out of the beater, but enough to rattle around or shift side to side when I beat. I put two blobs of that blue tacky stuff you hang posters with on the top of the reed and pushed the beater bar down on top of it. Now it's wedged right in place and I'm weaving easily.

Now, if only my warp wasn't about 10" too short for the last two samples I was supposed to weave on it...

Whew, that was a close call - I'm glad it worked out with a minimum of fuss. I hate it when I have a passing thought like that and it bites me later. (You'll mark that reed somehow, right)? My confirmation word is 'clodpin' - almost sounds like it could be part of a loom!

Bummer. The worst part is the time wasted, when the goal is to work efficiently! Hope the rest of the process goes smoothly.

If I'd had something I could 'stuff' into the gap I would have, but the gap was juuuussst that much to wide. :( And with a 40 yard warp, I didn't want to be fighting the reed/beater for the entire length....can't raise the reed because of the way it fits into the AVL beater.

What would be best would be to sell the reed to someone who has a loom that it would fit on. Or cut it down to make shorter length 9 dent reeds for my smaller looms. That's always a possibility.

And yes, I was rather annoyed with myself for not *thinking*! But it actually only took a few minutes to change the reeds so I'm not all that far 'behind'. I'll be weaving this afternoon.

First I'm going to go visit with my friend across the street. It's been a week since our last visit.

There's a new Terry Pratchett book out?!!! How did I not know about this?

That was the first thing that happened to me when I got my AVL, because I could not *dream* that a loom required a special-height reed... but I built a thingie to fix it: http://oddweavings.blogspot.com/2011/11/too-short-reed.html

(My verification word is perefeno - surely a mis-spelling of perfection?)

A friend suggested 9 epi for weaving tartan blankets with Briggs & Little yarn (I have a lot of it), but I haven't been successful finding a 9-dent reed except custom-made. I have a Glimakra 65" so need something wider than 35" or I'd buy yours! Do you remember where you got it?

My reed is 60" long but it would likely be difficult to ship - that border thing. :} Contact Joanne Hall at Glimakra USA - she can probably get one. It is marked 35 but when I put the tape measure on it, it had 9 dents per inch.

Unless I could mail it to you in Baddeck????

Shipping it to Baddeck would definitely be the easy thing - and my husband is there now. However, this is the first year that he's flying home -- if he was driving, I'd say 'go for it!' Sigh... Thanks - I'll contact Joanne. (What's the "35" if it's not the width?)

35 dents per decimeter (or about 4 inches). Works out to 9 dents per inch.