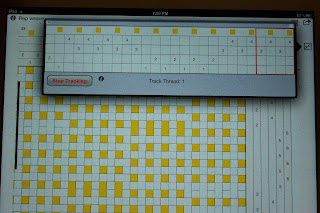 Those of you who are friends on Face Book know that I recently invested in an iPad.  I'd seen one being used in a workshop to track where the student was in her liftplan sequence and I thought it was brilliant!

After much soul searching and crunching of numbers I decided the benefits of having an iPad outweighed the expense and with a great deal of assistance from my computer guru and his assistant, I got one on the way home from the Alberta conference.

I confess I still am not entirely conversant with all the ins and outs - up until tonight it was basically a very expensive Mahjogg game, but all that changed when I went to thread the small loom with sample #10 for A Good Yarn.

I had purchased iWeaveit from the Apple app store, plus the 'treadle tracker' add on and without very much fussing managed to put a draft into the program and save it.  Tonight I added the draft for the sample, headed to the loom and I must say I'm impressed with it - so far.

The way I would usually follow a draft like this would be to print it out and then mark my place with a coloured pen or pencil.  What that means is that I have to pick the pen or pencil up, find my place on the draft, tick it off and set the pencil down again.

Not so with the tracker.  Once you have entered your threadling, it is a simple matter to select the tracker and a pop up screen containing the threading appears over your draft with a red box around the first four ends.  Tapping the iPad screen anywhere causes the red box to advance another four ends.  Simple and fast with no fumbling for a pencil.

The only draw back is that, depending on the weave structure, I might thread 6 ends at a time, not four, so I'm not sure how that is going to work when I get to one of those drafts.  There may be a way to adjust the size of the box - I may have to email the developer and find out if that is a possibility, even perhaps in a future upgrade.  :)  Like I say, I've only scratched the surface - there are other features I haven't begun to explore - who knows if I poke around long enough I may find that it already exists.  :)

The other reasons I bought the iPad were - as a travelling library (have downloaded several novellas and short stories - free ones - what can I say, I'm cheap!), a music system (computer guru had loaded some music on it for me), web access (when there is access to wi-fi, which means I can check my email on it instead of on my Blackberry, paying roaming charges in the US), and oh, yes, Mahjongg.

After getting it, I also realized I can load all my teaching dates so that I don't have to tell people that I have to go home and check my calendar when they want to know if I'm available for the coming year.  I've spent a couple of hours doing that and I'm also very impressed with the calendar that came with the iPad.  I'm sure that as I get used to it I will find more things that it will allow me to do.
Posted by Laura Fry at 9:09 PM

Congratulations on getting the iPad. Don's talking about getting some sort of 'tablet' before he returns to Baddeck - maybe I'll get to use it, too. I'll be interested to hear what else you discover that will be helpful for weaving.

On Ravelry I was shown how to change the size of the tracking box so it is already there. There may be other apps appropriate for weaving - have not looked. But I'm getting very fond of my new toy - er - tool.

I love my iPad! Now I am going to have to check out that app! Where on Ravelry did you find your answers?

Actually it's easy-peasy - when you click on the treadle tracker there is an 'options' button. You just click on that and you can set the size of the box. :)
cheers,
Laura