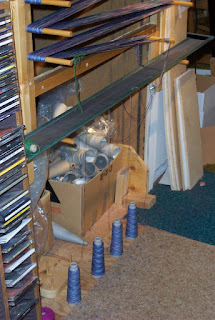 winding four ends at once...

Winding four ends at once is definitely possible but I don't find it particularly faster.  Which would seem counter intuitive - if winding two ends at a time is twice as fast as winding one at a time, winding four ought to be four times faster, right?

What I find is that with four ends it is harder to maintain consistent tension on the individual ends and one of them (the one held between the ring and pinkie fingers) always seems to be too far away from the rest and falls off the pegs.  Which means that I have to stop and get it settled in the correct place.  Which gets frustrating, if not actually winds up being slower than if I'd just wound two at a time in the first place.

But there is another reason for winding so many ends at once.  That reason is that I am trying to use up stash and get inventory woven for the fall sales.  It is faster in the long run to put a warp for four scarves into the loom rather than just two.  So I'm saving the loom dressing time that I'd have to spend if I only wound a 5 meter long warp instead of a 9 meter long warp.

Since I have assorted variegated yarns, it is much better in terms of blending the slightly different shades to wind from four cones to make the 9 meter long warp.  If I only wound with 2 cones at a time, I'd run out about 3/4's of the way through the 9 meters and the different dye lot would show up as a definite stripe.  That stripe might be pleasing, but it might also just look like a dye lot difference.

So I am 'fighting' with the four ends in order to wind up with a result that will at least be pleasing to me - and hopefully potential customers.

And wallowing in procrastination about getting started on writing the text.  I have opened Word and once I have done a little more work in the studio - the looms are both nekkid  and I'd like to at least get one of them dressed - I will begin sifting through the project details and start getting them written.

Currently reading Beastly Things by Donna Leon.  If you like Louise Penny you might like Leon, too.  I've only just got started (while waiting at the dentist's office this morning) and so far I'm liking what I'm reading.
Posted by Laura Fry at 2:46 PM

(verification word: deesidea - seems to support my idea, no?)

I, too, prefer to warp with 2 threads. But here's a question for you, Laura. I read somewhere not too long ago (don't remember where) that a person could get a nice random effect by warping with 4-6 different colors at once and not attempting to keep them in order on the warping board. Instead, measure warp as a 'bundle' and then take them off the lease sticks in a relatively random order when threading. I admit, this did provide a nice look in the project, but getting any decent length would be quite the challenge, as each of those bouts became quite twisted behind the heddles and had to be straightened out repeatedly while weaving.

Have you ever used this technique? Did I miss an important step in the directions (which, of course, I can't find since I read it somewhere online)?

Thanks for your unending insights!

Yes, if I had a mill I could use that instead. If I had more of the same colours I could put the warp onto the big loom sectionally.

Peg, I think winding such a bundle would work on a short warp but it's not something I would want to try with 9 meters. The rep weave warps were done with 4 ends bundled and they got terribly twisted over the 11 yard length. Just my experience...

Have you tried warping with a paddle to even up the tension on each of the threads?

I've tried a paddle a couple of times and never been able to get good results. I'm sure there is something subtle that I'm not doing. :(
cheers,
Laura

"And wallowing in procrastination about getting started on writing the text." Would it help for me to tell you how anxious I am for the "Big Project"! Have been on your list almost from the very beginning. :-)

In response to Peg: I do that all the time - BUT I *always* keep my fingers between the threads!!! I then do a 4/4 cross, which gives the "random" effect when threading. This is how we learn in Sweden, and it has worked for me for over 30 years... Pics on my blog - http://oddweavings.blogspot.se/2011/01/prequel-before-using-valet.html for the winding, http://oddweavings.blogspot.se/2009/11/blue.html for the results.