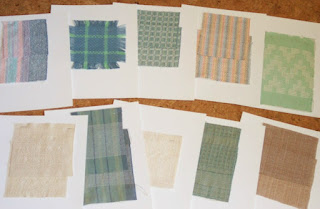 Today I stapled one set of each sample - of those that were ready - so that I could lay them out.  To my mind the samples should be visually appealing but the sequence also needs to make some sort of technical sense as well.

What I decided on was to lay them out in order of the size of the yarns - largest first (in the warp), then in complexity of the weave structure but also in a way that I felt would be attractive as people paged through the 'book'.

So this is the tentative line up.  I'm pretty satisfied with it but of course, things are always subject to change.  I may swap 2 and 3.

There are 10 samples/projects and each will be illustrated with a before and after sample because, after all, how could I do otherwise?  ;^)

I didn't get as much done on the Big Project as I hoped because I felt that before I could really get going on it I just had to clean the desk around the computer.  I confess there were papers dating back to 2009 - probably the last time I cleared the area down to the desktop!

However I did manage a couple of sessions of weaving and finished off the coral/red scarf warp: 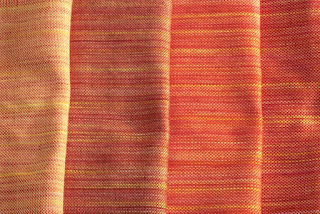 four scarves, four different wefts - from left - soy protein in natural (a light tan), dark red bamboo, an orange-scarlet Tencel, dark red Tencel...the colours are not quite true to life - they are actually a little more intense/darker in life

The warp was too long so the next ones will be shorter to minimize loom waste.  Not that anything is truly wasted because I donate the thrums to the Salvation Army.  The local branch has a textile recycling program and everything gets sent to Asia where it is broken down into fibre, spun and woven.  Part of me is delighted that my 'waste' will eventually wind up as fabric, although the cloth will likely be labelled '100% unknown fibres'!

Today I also picked up an early bd present along with an order for bobbin lace supplies.  My two compadres and I ordered some patterns from Larkholme Lace and Jacqui sent a couple of bobbins and a booklet of designs for my bd.  I'm not sure if I'm up to the challenge of the Flutterbies and Flowers - they require a lot more bobbins than I'm used to using plus adding in and subtracting the coloured threads that make up the designs, so I'll probably start with one of the bookmarks from the small booklet first. 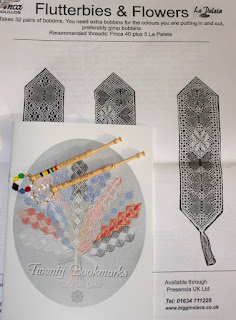