As mentioned in a previous post, I used to use this finish on placemats and table runners when we were doing table textiles in production mode.  For the purposes of these samples I didn't want to colour code the cut lines differently than the body of the textile because what I did was make a larger tea cloth while the samples themselves are more mug rug size.  I planned the warp so that the design (the green stripes) and the weave structure (turned twill) would act as cut lines and stitching lines.

Here, then, are photos showing how I do it.

The samples were cut on one of the green stripes.  Three threads were pulled from the cloth using the weave structure as a guide - 4 blocks were designated as fringe so 3 threads were pulled out of the fringe area leaving a ditch in the warp and weft.  Where they intersect there is a hole where the needle pivots: 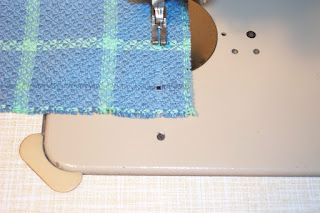 approaching the hole where the needle pivots 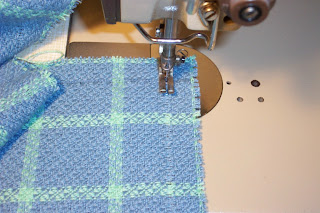 needle in the hole ready to start down the next side 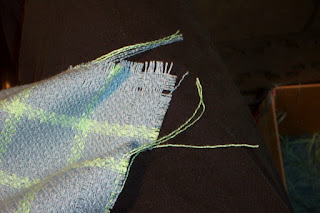 After sewing all four sides, overlapping the beginning with the end by about an inch and a half, the excess 'fugitive' ends and picks can be pulled away from the body of the cloth.  I find that starting at a corner, pinching a couple of threads from both directions, I can strip two sides at once. 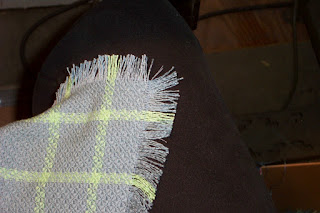 After the threads are pulled I am left with fringe on all four sides.  It looks very thready and not very attractive at this stage but after wet finishing the threads will relax and bloom, the corner will fill in and after trimming the four corners and pressing the end result looks pretty good.

Warning:  If you are doing a lot of fabric like this, there will be oodles of lint in the washing machine and the dryer.  Clean the lint trap in both machines when done.

The trick to using this method is to keep the fringe fairly short so that the threads can be easily pulled from the cloth.

I'm trying to find different methods to have fringe on a woven throw I plan to weave. With the method you've described, you lose some of your width. I don't want to do that. Any suggestions of other ways to have fringe on the sides?

Apply them using a crochet hook to pull a loop through, then pull the loose ends through the loop.