I feel like I've been banging on the same old drum for far too long (ergonomics/efficiency) so back to weaving...

Sample number 9 is a spaced and crammed warp.  It's been a while since I've woven this sort of cloth and I've run into some issues that I'd forgotten about - specifically the fact that the crammed selvedge doesn't want to beat in very well.

My first plan of attack was to use a temple, but of course that doesn't really help the outside 8 ends.  However it does keep the cloth stretched out to the proper width so I will continue to weave the rest of this 15 yard warp using it.  Sometimes slower is 'faster' - in this case the results are worth the little extra time it takes to move the temple forward every inch.

The problem at the selvedge continued so I modified my shuttle throwing in an effort to forestall the build up. 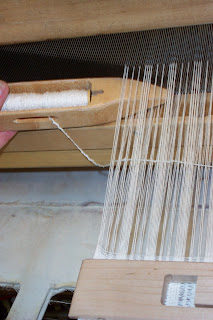 Then before I pull the shuttle entirely out of the shed I flick it toward the fell line, like so: 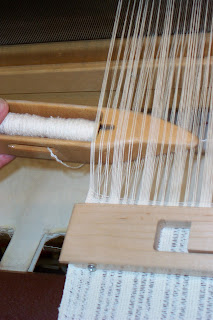 You can see in the photo that the shuttle is higher than the shed so the selvedge ends are being forced apart which helps to let the weft beat in properly.  I am not pulling or tugging on the ends, which would eventually lengthen them and cause yet more problems with the selvedge.

My other option - and one I may try when I go back to the loom - is to reduce the epi in just the 8 selvedge ends.  If I sley them 3/2/3 instead of 4/4 the selvedge will not be so dense and will not resist the beat up of the weft pick each time.

Still mulling that over but I'm leaning towards trying that before I go very much further.  As I put an 'extra' 5 yards on I've got plenty to cut the threads, re-sley and weave a sample and not risk running out of warp.

Laura, I hope you continue to bang that ergonomics drum for a long time to come! I learn something great and useful from every post.

Thanks Debbie - most of all I don't want to bore people. :)
cheers,
Laura