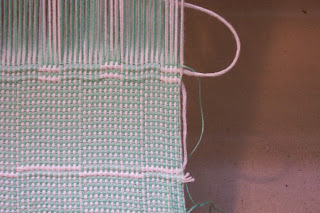 I don't like 'fighting' with the loom and warp.  I don't care much for weaving with two shuttles.  Especially weaving with two shuttles a weave structure that requires the two wefts to be wrapped around each other in one direction for some of the sheds, and the other direction for the other sheds.  It means I have to be constantly paying attention to the shuttles and twisting them in the 'right' direction in order to lock everything into place.

The photo above shows how the twist direction of the two wefts will lock them into place.  And once I weave a few repeats, I will have got the twist direction for each shed combination into muscle memory so that I don't have to keep such close track, watching to see which way it needs to go this time.

Ripsmatta is kind of a fun weave structure (once you get beyond the stuff you don't like to do) because you get four blocks on four shafts.  The possibilities for designing motifs are quite large.  In a small sample you really can't do too much, though, so I just threaded a simple point progression, and am treadling a straight progression so the cloth will have 'waves' or W's running across it.

And no, that's not a mistake you see in the photo.  The way the threads are sequenced, you have areas where the thick weft will descend lower than in other areas.  As you weave this all kind of straightens out.  I'll show more when I've got more woven.  One done, 99 more to go (which means a second warp because I knew from the get go that one 11 yard long warp wasn't going to do the entire number of samples required).

Once these samples are woven it will be full speed ahead on the text and sample stapling/assembly.  'Bout time too - it's the middle of June and July 9 will be here all too soon!
Posted by Laura Fry at 3:56 PM