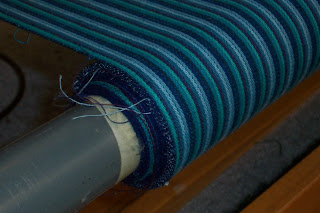 Yesterday I cut about 14 yards of cloth off the loom so Doug could do the pressing today and I could have some to take to Sweden with me.  There are now about 7 more yards on the cloth beam and if I'm doing the math correctly (always a chancy thing!) there is enough left for one more length and the rest will get sacrificed to the loom gods.  Two yards isn't going to be nearly enough for a top and I've about run out of patience dealing with the errant ends on the selvedges not wanting to play nicely and be an actual working part of this fabric.

One of the benefits of getting older is that some of the 'panic' has subsided.  Years of dealing with critical deadlines and either making them or surviving the aftermath of not making them have given me the gift of being a lot more selective in the things that I will accept for commissions.

Yesterday I punted a commission to a weaving mill.  My schedule for this year has gotten pretty much filled up and to do the commission would have required a lot more time than I have available to deal with it. The mill has a lot more efficient equipment (especially the wet finishing) than I do so much better to pass the work on to someone else better prepared to deal with a yarn that takes a bit more coddling than I'm prepared to do.  Especially given everything already in the pipeline.

I have another commission that I think is going to wind up being a 'failure' given the issues I've had with the loom with this warp.  Right now I'm thinking of emailing my customer, telling him that I will put the warp on the loom but will reserve the right to abort the project if necessary.  The cloth won't go to waste, I'm sure I'll find an alternative use for it, but quite frankly I'm done with sweating bullets to appease customers for special orders.

I am going to embrace my cranky inner crone and focus on the things that give me joy instead of worrying about work that will bring in money - work that winds up being not much fun in the end and only done for the sake of the money....
Posted by Laura Fry at 12:49 PM

Email ThisBlogThis!Share to TwitterShare to FacebookShare to Pinterest
Labels: business

The deadlines are one reason I don't do commissions (except for the woven portraits). Stress and pressure are not something with a "daily recommended dose" unless it's zero.

I was wondering - what is the mill that does wet finishing?

I don't know if there is a mill any more now that does anything other than their own.