Of Copying and Copyright

I don't know the ins and outs of copyright law.  I can't afford a lawyer to explain it to me, nor am I terribly concerned about 'protecting' my designs.

Frankly, the label 'designer' is not one I wear easily, although I must because that is precisely what I do.  I take yarn and using no other resource than my own creativity and knowledge figure out how to interlace warps and wefts to create, primarily, functional textiles.  Functional textiles that hopefully add beauty and grace to someone's life.  My own in the making of them and someone else's in the using of them. 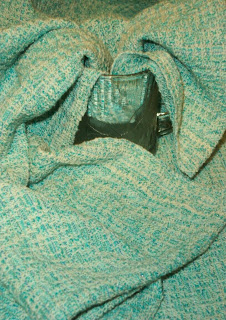 I had two choices.  I could try to talk to the weavers and explain that what they were doing was on so many levels just plain wrong.  Or leave them to it while I waited on actual customers.  I would have had to 'confront' them in a public place with customers drifting in and out of my booth, in a venue where I had paid a great deal of money in order to sell my work to appreciative customers, not hold a mini-seminar in my booth to try and educate well meaning weavers who, in all likelihood either had no clue or - and this is something that I don't want to believe but is true in some cases - simply didn't care.  That they saw my work, appreciating it to the point of wanting to make something exactly like it was on one level a compliment to my skills as a designer/weaver.

The deciding factor in not taking the time to explain to them that it was rude to do a fabric analysis in my booth, taking up valuable floor space and covering my display while they did it was that I had decided to discontinue the line when my materials for said design ran out.  I also did not want to have a potentially angry confrontation in my booth with the public walking into - or by - my booth.  I didn't need that negative energy in my life on any level.

I know that some weavers will appreciate what I make to the extent that they want to emulate it.  I have no problems with someone taking one of my textiles, figuring out how I did it and then tweak it to produce something uniquely theirs.

But as I mentioned in the last post, not everyone is confident enough in their skills to do that.  So they follow directions, buy kits, reproduce precisely what a designer has created.  There is nothing wrong in so doing.  The 'wrongness' is when they then sell that work as their own without acknowledging the role of the designer.

The weaving community is a very small one.  To take something that has been seen in Handwoven, replicate it exactly and then sell it is, as far as I am aware of copyright law, an infringement.  OTOH, it doesn't take much to change the original sufficiently that one can claim it as 'original' work.  Change the colours, change the dimensions, if nothing else, change the threading, tie up and/or treadling and voila, you have a textile that is changed enough from the original to make it count as 'original'.

Ultimately by publishing photos - and sometimes drafts - of the textiles I create my goal is to inspire others and increase their knowledge.  It is partly why, up until now, I rarely publish precise details of my textiles.  (I must for inclusion in Handwoven.)  When I do provide precise details, right down to the supplier, I am well aware that these items may be reproduced precisely.  That is, after all, the whole point of providing those precise details!

So no, I don't get particularly exercised when I see my work either copied precisely or emulated.  By the time I see items similar to what I make in the marketplace, I've generally moved on to my next best idea.  And if not, it is simply a reminder that I need to...

Email ThisBlogThis!Share to TwitterShare to FacebookShare to Pinterest
Labels: business

Whew, well said Laura! Bravo for not taking what could have been a negative exchange with the weavers who were in your booth measuring your placemats.

As always, rise above, and the dirt will wash away. Your standards are higher than some people's common sense ;) A well intended crowding of the tape measure people with a simple authoritative, "what do you think you are doing?" is nice too...

I do not know how copyright works in Canada. However, in America, ONLY THE PATTERN falls under copyright, NOT the work made from the pattern. Simplicity among others tried for years to sue dressmakers for using their patterns to make clothing for customers. They lost. Every time.
If someone tries to sell the pattern, though, they ARE in copyright violation and can be prosecuted. Useful items such as clothing, curtains, placemats, etc. cannot be copyrighted.

That being said, I can't believe the nerve of the people who came into your booth!!! For the love of Pete, you'd think they would at LEAST have the common sense to BUY the item and dissect it elsewhere, at their leisure, away from the booth!

A piece of art can be copyrighted. But you have to have the money to follow up on it. My mother in law was a professional animal photographer and copyrighted all her photos. That didn't stop Shimmel from using one of her photos without permission to make a painting that made him millions of dollars and can still be found on posters and folders in stores today.

Thanks for the clarification, Susan. I did not understand that you could 'copy' a published project and sell it.

Um, I think the last commenter may have it a bit backwards, but I'm not a true expert on copyright.

I just downloaded Interweave's free eBook on copyright and they kind of gloss over the issue of weaving draft copyright by not fully explaining the issue. What I think they mean to say is that someone can't take a photo/screenshot of a weaving draft/pattern in a book or magazine and then claim that photo/screenshot as their own. But if they were to create their own weaving draft/pattern of the same thing--say, a straight twill-- and then publish it, then that wouldn't be copyright infringement. There might be some examples of a truly unique weaving pattern draft such as would be done in a jacquard, but, for the most part, the drafts weavers use--twill, summer/winter, huck, etc.--those are not copyrightable.

However, the product of that draft is usually copyrightable, except where it might be an exact reproduction such as from something found in Handwoven. It's the "look and feel" of an item that makes it unique and copyrightable.

In the example given by the previous commenter, while the Simplicity pattern (the paper one) is unique to Simplicity and therefore copyrightable by them, the garment made from it is not covered by Simplicity's right to copyright.

In the book publishing business, where I know a bit more about copyright, even book titles are not copyrightable.

Alas, in the U.S. (don't know about other countries), the burden of defending copyright is with the owner, hence there is much more violation given just how much attention can be paid to keeping track of the item and its uses.

To go beyond this, esp. regarding derivative works, it's best if a lawyer experienced in intellectual property issues is consulted.

Its always a hot issue on public forums and usually degenerates into an unbearable topic to try and follow on ravelry and the like. It's a bit confusing and sensitive - I've been on both sides of the issue. It was a bit tacky for them to be so obvious but in the end not illegal or anything. The best way is to try and find it a compliment - but that can take some doing sometimes.

I agree with SusanS - both on copyright and her opinion of the "analyzers". I think that if something similar ever happens to me I might say something like "if you buy one, you can copy it much more comfortably."

However, I am very relaxed about people taking photos of my work (mostly knitting) - I figure if anybody can copy an item from a photo, they deserve to have it. (And if they try to make money by selling it, they'll discover that it isn't that easy...)

Guess who is catching up, here?! This post rings very true with me. I sometimes get emails from weavers who have seen a photo of something I made on my blog saying, "but you didn't publish the draft, can you send it to me?" It is very flattering, of course, so I always say my 'no' very politely! Instead, I suggest that they look at some of the resources (books, magazine articles, weavezine) that I found useful when I was learning that structure or planning that draft. I think what irks me is not the instinct to copy but the implication that I *should* have published the draft. I often do post drafts, or bits thereof, in any case, if I reckon there is something to be said about them, but ironically I have become less inclined to do so as a result of this kind of comment! And fortunately, as you say, there are always those new ideas waiting to be given their moment on the loom.