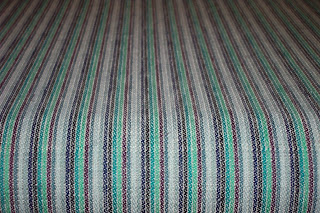 The downside of having as much technology on a loom as I have is that when things go wrong (and they do go wrong!) sometimes it's hard to figure out what exactly is causing the grief.

The first indication of trouble was when the cable for shaft 16 kept jumping out of the finger that controls it when rising.  I worked around that by changing my tie up so that when it didn't rise it would be obvious.  In the end I decided I liked the 'new' weave structure better anyway, given that I am planning on cutting the cloth on the bias.

Then shafts started lifting that shouldn't be lifted.  Usually this is an indication that the sweep arm has slid out of alignment, usually towards the front of the loom.  So I loosened the bolt, nudged the arm ever so slightly towards the back of the loom and commenced weaving.

Now shafts that lifted started to fall down.  This is generally an indication that the dobby box isn't quite close enough.  Since the errant shafts were all towards the back of the loom the box was nudged ever so slightly towards the loom, but only the back 'half'.  (IOW, we only loosened the back bolt, not the front.)

Once all that appeared to be under control the picker on the left side of the loom started to malfunction.  Eventually we realized it probably wasn't getting enough oil through the system.  That, sitting idle for about 2.5 months, the air hoses and switches had probably dried out.  Doug cranked up the oiler and things seemed to improve considerably.  I turned the oil back down, but apparently too much because just before I took a break a few minutes ago the left picker started acting up again.  I've turned the oil up slightly and hopefully after my break it will be the right amount and the loom will start to behave nicely again.

While these issues are teeth gnashingly frustrating when the loom is working properly it's a whiz.  So while I'm stressed about it not working quite right, the cloth I'm weaving is for my own purposes and a few 'flaws' here and there are not going to be a huge issue.  I'll either cut around them, or lacking the ability to do that, remember that it is through the 'cracks' (i.e. flaws) that the light gets in.

Thank you Leonard Cohen.
Posted by Laura Fry at 2:52 PM