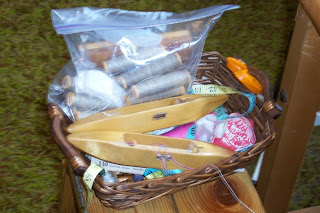 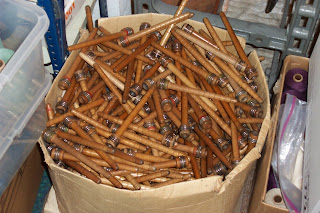 Meg fromNelson suggested people share their spools, which I think is a much finer idea than trying to 'fool' people.  :)

So at my Leclerc Fanny, the bobbins wound last night, left 'soaking' up moisture in a plastic bag.

Beside my pirn winder, my box of pirns.  I will be using these on the warp currently being put onto the AVL - one of these days.  I decided to concentrate on the warps for the small loom so that I can bring them to Sweden with me.  Right now there are 3 left to do.  I doubt I'll get them all done before I leave for Langley on Friday, but I might be able to manage two of them and then the last can easily be completed after I get home and before I leave again on the 23rd.  She says, optimistically.

Today I got an update on an opportunity that first arose at the end of last year and it looks like full steam ahead.  Plus another opportunity from the same quarter.  Details when I can share.  I don't like to say too much until the project is actually underway - because there is many a slip betwixt cup and lip, as they say.

I have also been reminded (by the scale) that my intention was to try an lose some weight this year.  So far I have not been exceptionally successful (iow, not at all!) so the time has come to get serious about that.  Wish me luck!

Currently reading Murder by the Book by Susanna Gregory
Posted by Laura Fry at 2:12 PM

Luck! I had never heard "There is many a slip betwixt cup and lip," but is that ever true. Especially if one sips and types at once.