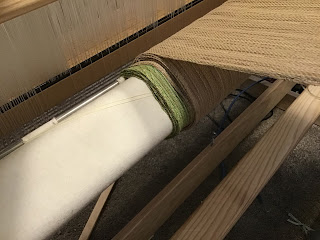 Recently someone said that linen did not behave the way they expected.

If you have only woven with wool and cotton, weaving with linen will be...different.

Linen has essentially zero elasticity.  It is denser than cotton and stiffer.  As such it does behave differently.

The above photo is an example of something that might be unexpected.  Since linen is stiffer than cotton, it will draw in less than cotton.  Hence the wider width on the beam.  This is why, if you are going to use linen as weft for a time, then cotton (as I did here) it is a really good idea to use the linen first, then switch to the cotton.  If you use the cotton first, the linen will be wider and the selvedges will then be unsupported - unless you add sticks to provide support.

During wet finishing it will not have as high a dimensional loss as cotton.  If linen and cotton are used in stripes in the warp, you can get lengthwise 'seersucker' effects.  The cotton will shrink more than the linen and puckers can appear in the linen stripes.  This effect can be mitigated somewhat by how wide/narrow the stripes are so sampling is required if this is an effect you want.

During weaving it will feel different when you set the tension and beat.  A linen warp must be beamed as perfectly as possible so that there are no discrepancies in length in the warp ends and therefore no overly loose or tight threads.

Generally I find a linen warp behaves much better in a loom where the shed is formed by both rising and sinking the threads, iow, counter balanced or countre marche.  A smaller jack loom with short distance from front to back will potentially need some adjustment to the shed geometry.  I did actually manage to weave a fine linen fabric on a Woolhouse Margaret (about the same length front to back as a Baby Wolf) by changing the height of the back beam, raising it about one inch.  Prior to that adjustment the shed floor was so loose it was impossible to get a shed or beat properly.  After the adjustment I was able to weave it very carefully.

The high density of the linen yarn means that bobbins should not be over full.  I tend to fill just to the height of the flanges on standard plastic bobbins or the weight of the shuttle and fully loaded bobbins is too great and can cause issues with the selvedges.

Selvedges may not be great on linen anyway due to the stiff nature of the yarn as it won't want to curl round the selvedge and there may be little loops.

Linen is a huge fan of moisture.  Some people recommend misting the warp and storing bobbins with a wet cloth.

My approach is to run a humidifier to raise the relative humidity in the room (because I don't much like getting static discharge from arid conditions) and then use a jerry rigged humidor to store the bobbins in.  The bobbins sit in a container inside a humid environment and can safely be left there for weeks without harm because they are not wet.

I was so pleased with myself, using up the 'last' of my fine linen.  And then a couple of weeks ago a friend (10 years older than me, attempting to seriously downsize her studio) presented me with a bag of yarn.  Some fine silk.  Some fine linen.  Yay?
Posted by Laura Fry at 10:21 AM

I am relating to the linen comment above....small jack loom, inelastic linen, bottom of shed sagging. I used high tension (didn't know about raising the back beam) and slowly persevered. My selvedges were actually okay. I had a humidifier running, closed the door and also used a damp cloth behind the heddles. My bobbins were held in a "humidor" as well as spools of weft linen. Oddly, 3 napkins barely took up but the last one (was I in a hurry to be done?!) was narrower. The green Irish linen ran like the Dickens but is lovely to behold after steam pressing. Dianne