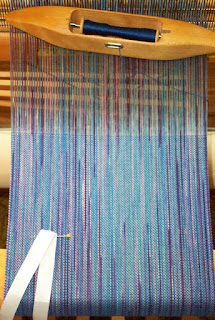 
It was with a great deal of satisfaction that I beamed the 'last' blue soy protein warp - I'd met my goal within the deadline I'd set for myself.  I could think about the next thing to do - after dressing the small loom with a 2/16 cotton warp for my student and beaming the 2/16 cotton warp for tea towels and curtain fabric, that is.

Digging through my stash to see what else I could use up, however, I found more cones of soy protein!  I wasn't done after all! 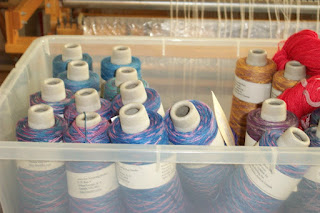 At least it wasn't as bad as first feared - the box held an assortment of yarns, not just soy protein.  So the end is in sight - four more warps wound four ends at a time (9 meters long) and four warps wound 2 ends at a time (5 meters).  That will give me an additional 24 scarves on top of the 48 from the first stage.  By the time I finish weaving them all I will have decent inventory - of this design - for the 4 major shows I will be doing this fall (along with several smaller venues).

In the end I probably won't have the number of different designs I like to offer - less width and more depth.  But with what I already have on hand, it should be sufficient.  It looks like I won't get much more done until after September when I get back from Puyallup and Texas.  We'll see how much I can do in the 4 weeks before the next sales event in October.  Gratification will be delayed!

Email ThisBlogThis!Share to TwitterShare to FacebookShare to Pinterest
Labels: scarf

september in puyallup? i live in puyallup! are you a guest speaker here? or just doing the fair? love the blog thanks for all the awesome weaving tips!

I'm doing the Fair. Will be doing the Seattle Weavers Guild program for their Saturday meeting - the 15th, I think.
cheers,
Laura