Weavers sometimes ask me if I don't get bored weaving the 'same' thing over and over again.  I can honestly say I don't.  It was, in fact, the one attribute that allowed me to know that I could be a production weaver.  I knew I could work hard - that indeed, I liked the physicality of weaving - and while I liked the challenge of designing new textiles I also knew that I could face the 'slog' of weaving them in sufficient quantities to make trying to sell them worthwhile.  Not having to think about what I'm doing I can just get into the 'zone' and use weaving as a working meditation.  Very soothing - as long as everything is going right!

The thing is, once I've done the sampling and developed a quality of cloth that I'm satisfied with, after that it's just a matter of different colourways, winding the warps, dressing the loom and weaving them off.  The results are guaranteed.  No worries!

Here are the four purples that have gone into the warp on the loom  now.  They aren't quite 'true' to life but close enough. 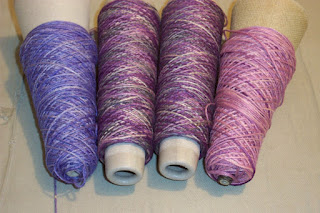 Here is the first scarf being crossed with a dark green.  The dye job is purposefully not level - there are areas of lighter green which faintly show in the woven cloth.  If you look closely you might be able to see some of the differences in shade in the photo below.  The dark value of green darkens the purples considerably but you can see the different shades in the warp.  The two cones in the centre of the photo above have areas where the dye is almost not there and the yarn is more the natural beige of the soy protein. 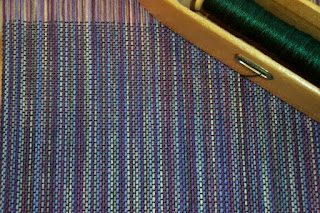 Below is the second scarf.  For this one I went the other direction in terms of value - the weft is a fairly pale lavender. 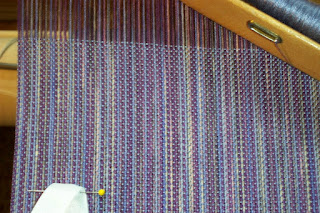 I'm not sure what I'll use for weft on the other two scarves on this warp.  The goal is to use up as much of my stash as possible so I'll be rummaging through my Tencel shelves to see what I've got left.  I think I've got a really dark purple that will be perfect on this warp.

Email ThisBlogThis!Share to TwitterShare to FacebookShare to Pinterest
Labels: scarf

Nice colors in that warp! I love how you can change the cloth completely just by changing the weft color. Even a slight change makes a huge difference.

Woo hoo! I just ordered my copy of A Good Yarn!

I love those purple shades, they are beautiful! I've just finished 40 metres of linen warp on a drawloom, and I totally agree with you. I like weaving the same pattern, and I like the physical work.
Have a nice wekend!