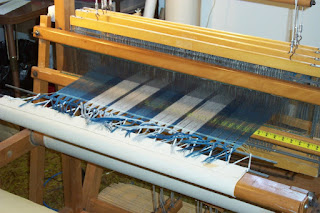 Fudge one place and you usually wind up having to fudge somewhere else.  So it is with this warp.

Tossing two of the ends out of the left hand grey stripe means that the last dent would have contained 2 ends instead of 4.  From past experience I know that this will lead to a nasty selvedge as the density will be all wrong.

I could have just tossed the last two blue ends off the warp, but instead I chose to toss two grey threads from the second from left grey stripe.  This makes both of those stripes the same width.  It also gives me two 'extra' grey ends I can use - if I need them - for repair ends as the end of the warp comes up off the warp beam.  Not exactly the lesson I had expected to present to my student, but.....

A good teacher should be able to show how to get around these little bumps in the road, right?

I find that the best experiences are the ones that teach me how to recover from mistakes.The most expert weaver out there is the one who can most easily (and without fuss) recover from some stumbling block or other.

I agree totally. One of my mentors always said that if you aren't making mistakes you aren't learning anything new. :)
cheers,
Laura

I totally agree. When teaching beginning classes, I "insist" that certain mistakes are made by at least one person, so that I can teach them how to fix them. Things like threading errors that require string heddles, broken warp threads, etc. They usually oblige and provide excellent learning opportunities, but I have been known to force an error if they've been too careful! It saves frustration when they get home and encounter the inevitable mistakes that happen to all of us. One student emailed me and thanked me for the feeling of empowerment when she hit a snag at home and was able to recover. She did me proud!
-Carol