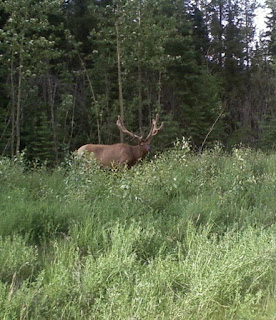 Picture of an elk, in the bush by the side of the road...

Life is full of complexity.

The older I get, the more I understand that there is very little that human beings actually understand.  About anything, really.

I figured out at a rather young age that Life was Complicated.  And Hard.  But also?  Beautiful.

Wellness and Illness are all part of the human condition.  Some people have the constitution of an ox (as we used to say), and others?  Not so much.

The problem with illness is that it can be mild or severe or anything in between.  A spectrum, if you will.  Just like so many other things.

In my craft work?  Completed was always good.  Finished so that I could wear the knitting or sewing, use the hand embroidered tea towels, eat the home made bread.  I never bothered too much about Perfect, Good would do.

I've never been overly much bothered by other people's opinions.  Not enough to change what I was doing, that is.  Since I never felt that I fit into society's definition of attractive, I never much bothered.  I settled for clean and as tidy as I could manage.  My house will never win the Good Housekeeping award, and that never much bothered me.  My approach was to simply stop inviting people to visit my home unless I knew they were there for me, not my housekeeping.

Over the past year I have become more aware of the level of disabled people in society and just how invisible disability is.  If someone needs mobility aids, it's pretty obvious that they are coping with Life using some sort of assistance.  Other things are much less visible.  Chronic pain for instance.

As a society, we have gotten used to some forms of 'dis'ability aids, such as corrective lenses, hearing aids.  When I purchased my hearing aids the young woman took care to point out that they came in a silver colour which would go nicely with my grey hair.  I said that I wasn't bothered about hiding them, I just thought the silver was pretty so I would get that colour.

I've worn eyeglasses almost continually since I was four years old.  My frames have been large and loud, smaller and more 'traditional'.  The last time I bought new frames I wanted the brightly coloured ones but they didn't fit my face.  So it was back to the 'standard' frames.

When I needed a cane, a friend fancied hers up (she was loaning me one) with decals.  If/when I need one in the future, I'll have something 'fancy' because why not?

Other forms of 'dis'ability include people who need to watch their diet, for whatever reason - diabetes, food allergies, celiac or other gut issues.  My mother became quite upset when I would refuse food at social gatherings.  But I knew I could not have some things and protected my health by politely but steadfastly saying 'no, thank you'.  She accused me of being rude for refusing.  I'm sure others thought the same, but I didn't care.  I had to protect my health.

For the past few years, it's my energy levels.  After years of dealing with my lack of energy, I now understand that fatigue is the kind of tired that never gets resolved by simply sleeping longer.  I wake up tired.  I make my way through the day tired.  I go to bed tired.  This also is a form of 'dis'ability.

The other day while scrolling through Twitter, my eye lit on a post that said something to the effect that willpower is just the ability to moderate one's dopamine.

Since I have lived most of my life relying on my willpower to get up, get moving, work, continue in the face of chronic pain and fatigue, knowing that if I can just get to the loom and weave aerobically I can generate endorphins and feel better...this comment kind of slammed me between my eyes.  It is something I have been processing and can find nothing wrong about the statement.

Brain chemistry is...complicated.  I went through burn out a few years ago, brought on by a complicated set of circumstances.  Finally after 18 months of trying to continue, I went to a different doctor, laid out what was going on with me, and she told me that if I had been dealing with these things for 18 months I was in a clinical depression and no amount of pulling myself up by my bootstraps would lift me out of it.  My brain chemistry had changed and the only way back was to medicate and rebalance.  So I went on medication.  Once it seemed I was beginning to recover I asked how long I would need to take the medication.  She told me that I had to medicate for as long as it had taken me to hit 'bottom'.  In other words, 18 months.  She was not wrong.

I am now able to moderate my dopamine again and I do that largely by continuing to work in the studio, weaving, generating endorphins as best I can, given my new physical reality and fatigue levels. Some days are easier than others to dredge up my willpower and do that.

But always I need to consider my personal health limitations - what I can, and cannot do - and remain functioning.

During this time of pandemic isolation, people like me who are immune compromised need to factor in precautions so that we don't catch this virus.  For us, wearing a mask is going to remain a first line of defense.  I really hope that once herd immunity has been reached that people who are 'healthy' who blithely wave away the protection that wearing a mask provides, not just for covid but flu and colds, will realize that some of us who have 'invisible' health issues need to risk assess every single day and that general societal acceptance of the wearing a masks becomes routine.

This strikes a chord with me. Among other chronic issues, I'm "high functioning" autistic with low support needs, which means that most of the time my neurological disability is invisible. Like you describe with your dietary needs, it can be difficult to manage my own needs without being seen as rude. And on bad days, I have to wade through executive dysfunction to get to the things that bring me calmness and happiness. It is, indeed, complicated.