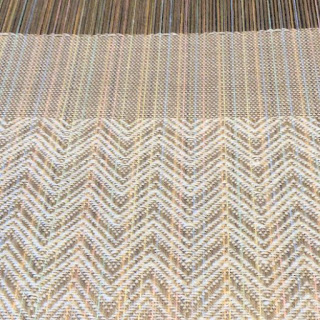 I must admit, I am running out.

I am running out of a lot of things, options mostly.  Mining my stash means that my colour choices are gradually being used up.

For this warp I used four ends of a variegated yarn with yellow, peach, pink, blue and green, the rest of the warp is various shades of beige.  The values were pretty close so while it may sound a bit like fruit salad, they worked well together.  But I used up the last of that yarn (except for dribs and drabs too little for another warp).  On the other hand, I still have lots of beige left.

While I wove on this warp yesterday I thought about how I would combine colours for another beige warp.  The weft will be the same white cotton flake, and I wanted something a little more interesting than just beige.  Then I realized I didn't need a variegated, I could just put some of those colours, which I have in solids, in with the next beige warp.

Working in series like I do, I can make minor tweaks/adjustments with each fresh warp.  The pot on the back burner keeps simmering away while I think through the options.  Picking, choosing, changing my mind.  I rarely stop with one of any design because I find as I weave each warp, I continue to examine, think, puzzle over, try something else, then something else again for the next warp.

I got two towels woven yesterday and plan on two more today.  That's my goal lately.  Just two towels.  So far that's been working ok so I'll keep at it until the flake is used up.  Then I'll do the cotton boucle as weft on a similar type of warp set up.  I dug all of the loop that I have out and there is enough blue to do a couple of towels, and enough white to do maybe two warps.  After much thinking over the past few days, I've decided to use a brighter combination - turquoise green and blue for one of those two warps.

After that I have yarns pulled for a couple more 2/8 cotton warps, one of which will have a variegated 8/2 cotton weft (the draft is already designed) and another with much darker beiges which will have the cone of single linen.  I will most likely use the same draft as for the 8/2 cotton weft.  Or not, depending on how that one turns out.

I reserve the right to change my mind at any point in the process!