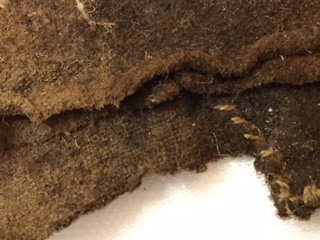 This morning I saw a meme on Facebook that said something like:  Someone mended my pants using string and a tiny sword and it was MAGIC!

My first thought was wait til they see knitting.  Or crochet.  Or any other textile activity.

Another saying that came to mind was (paraphrasing) Science that isn't understood appears to be magic.

Archeology has been finding older and older remnants of textiles, pushing the date back to +/- 30,000 years.  The quality of skill required to make those textile finds is such that it is obvious (to anyone who knows anything about making textiles) that humans have been working with string for much longer.  Thing is, fibres will eventually return to the earth, unlike pottery, so evidence is difficult to find or preserve once removed from their burial grounds.

The remnant in the photo above dates to somewhere in the 1700s and was found in a midden (hence the brown colour).  I may - or may not - get back to Nova Scotia to examine the collection more closely but the majority of the remnants were wool, mostly woven with some knitted items (balaclava, socks, mitts) some were woven from single yarn, others from 2 ply.  All were of a grist that modern handweavers don't much use.  The skill level of first (hand*) spinning the yarn, then (hand*)weaving and wet finishing it, was of a very high quality.  Since they were found at a military base (fort), it seems reasonable to assume that much of the cloth was made in England and imported to Canada.  But someone who specializes in wading through documentation would have to try and winkle that information out of the records.

My interest is more about the cloth itself.  What twist direction in the yarn?  How many twists per inch, especially for the single used as warp?  (I've done some experimentation with a spinner on this.)  What epi/ppi?  What weave structure?  (It looked like mostly plain or 2:2 twill.)

Society in North America is so removed from the production of the goods they use daily that many of them think that it just 'magically' appears on the store shelves.  Knowing how to repair things has become a lost art for much of society.

I wear my clothes until they wear out.  We have some sheets older than some of my friends - no cotton left, just polyester.  But no holes, so we keep using them.

It's time we, as a society, stopped the endless consumerism we have been trained to accept as normal.  It certainly never was in my younger years, and it is an attitude I live by to this day.  Use it up.  Wear it out.  Recycle if that is an option.

Textile crafts are far from a 'lost' art.  The people who keep those crafts alive work to understand their craft and work to the highest standards they can.  The fact that the bulk of the population is divorced from the making of textiles means that there is no understanding of how textiles are made and just how 'magical' they all are.

Yes, people are removed from many of the products they use. My brother and I were discussing the subject yesterday.