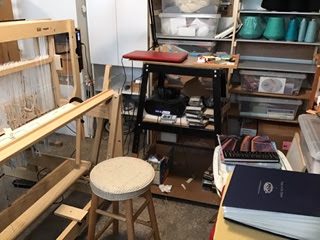 Yesterday I got the towels pressed, then beamed the next warp.  The day wasn't looking very nice so instead of walking, I went ahead and began threading the loom.  Forgetting that I have a Zoom this morning.

So right now the studio is particularly chaotic with the loom half threaded and me trying to cram all the stuff I need for Zoom into the tiny space in front of the loom.  Because that is the space in my studio that best meets the set up needs for doing the Zoom classes.

But - it's not ideal.  And it feels disorganized - even to me.

On the other hand, my teaching space has, historically, rarely felt anything but cramped and disorganized, so this is nothing new.  I have taught in cramped rooms with little light, barely a table to put my samples, sometimes just a flip chart for doing diagrams, barking my shins on looms.  One workshop was in a basement with two lightbulbs and a broken piece of blackboard.  But the students were there to learn, so I taught.

When I booked this date for a Zoom, I was well aware that it is our wedding anniversary, but I frequently was away from home teaching and it has always been a moveable feast.  When mom was alive she would check to see when I would be in town and we would get together when I was.  We never cancelled, just moved it.  It took mom a long time to understand that being self-employed didn't mean I could drop everything at her beck and call, something that she ought to have understood herself, given she was self-employed at the time.  But she did finally accept that I also had obligations to others and respected that.

What I failed to realize was that today was also Mother's Day, until just last week, in fact.  Part of my blinkered approach to Mother's Day is the fact that none of our mothers are alive anymore and we have no kids.  So a lot of times these 'holidays' go unremarked and uncelebrated.

So here I am today, feeling kind of crappy, both physically and emotionally as I get bombarded with seasonal allergies and constant reminders that I am outside of societal norms.  Again.

The older I get the less energy I have to spend but I'm hoping that there will actually be a few people this morning or else I'll be talking into the void.  But that's actually ok because I will record the presentation and post to You Tube.  I was just hoping for some interaction for this topic.  And maybe having fewer people will actually allow for more of a 'conversation'.  Who knows.

The big thing is that I am getting the information 'out there'.  And that seems important to me right now.

And yes, that's a boombox with cassette player.  And stacks of cassettes.  Golden oldies.  Just like moi.