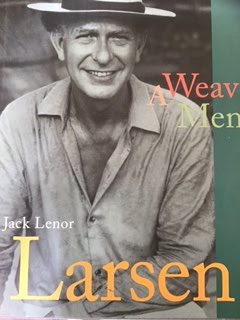 One of the books languishing in my pile of  books-to-read is this memoir of Jack Lenor Larsen.

I bought the book a few years ago, but somehow have yet to find the time to read it beyond the first few pages.

He was a most interesting person, although the memoir is a bit dry (at least what I've managed to read so far).  His accomplishments were many and varied, not least among them the many books he researched and wrote about textiles around the world.  I was gifted one of his books by my mentors "Material Wealth" upon attaining my master weaver certificate.  Another book I have yet to read because the photos of the fabrics are so gorgeous I get captivated by the cloth and forget about the words.

I had forgotten that he died last December - another loss among so many the past year.

Having been in the weaving world for 40+ years, I have actually met many of the people who are just names on books nowadays.  I was extraordinarily fortunate in managing to get into a rare workshop led by Mr. Larsen on Whidby Island in 1994.  At the time I was very much involved in organizing the ANWG conference here in 1995, where I had contacted Mr. Larsen about being keynote speaker.  When I introduced myself to the class (as we all did) I was the last person in the class to provide a little mini intro and I included the fact that Mr. Larsen would be the keynote speaker at the conference the following year.

When I sat down Mr. Larsen looked pensive and then said something to the effect that when I had sent the invitation to speak in 1990, he couldn't think of a reason to say no, so he said yes.

As part of that conference we were able to have a small exhibit of some of his textiles and I was part of the crew that hung it so I had the chance to see the fabrics up close and personal.  A rare opportunity.

There are many people who have provided strong shoulders to stand on.  I would count Mr. Larsen among them.