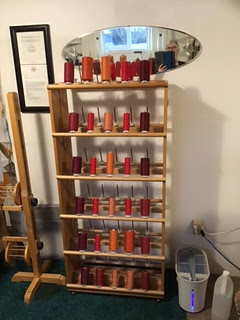 the 'last' tea towel warp (for now)
Yesterday I cut the first half of the grey/blue warp off the loom and it was time to get the next warp ready for the loom.

I have worried away at this warp for weeks, wondering if it will 'work' or not and finally the other day as I walked by the bin with the yarns in it, realized that yes, it will work and it will be just fine.  In fact, it is the perfect warp to begin the new year with.

In many northern climates, the solstice/beginning of the new year is celebrated with festivals that feature things like huge bonfires or fireworks.

This will be my version of that as this warp ought to go into the loom right after Christmas and will see the new calendar year in.

When I packed up my stuff from the guild room, I realized just how many tea towels I have woven over the past year and a bit (including the linen weft ones this time).  And I have sold some, so there were even more.  Since the sale began I've woven yet more so once we get the boxes unpacked I can begin looking to see how best to offer them for sale again.

With the huge holiday volumes of mail I decided to stop listing anything in my ko-fi shop and will wait now until after January before I begin again.  I also need a better way of identifying them so that when people look at my shop (which I do hope they will do), there will be a better way of someone placing an order other than the not very helpful labels I have done to date.

Organization.  It's a thing.

It is this very kind of administrative work that I'd hoped to not ever have to deal with again, but since all the craft fairs I routinely do were cancelled, and there was only the guild sale, I didn't sell nearly as much as I'd hoped.

With covid continuing it's rampage through the population there will be little opportunity to sell things locally so I need to up my game with on line sales.  I am hanging on to the hope that the pandemic will be enough under control that next year's craft fairs will be able to go ahead.

There is another good reason for finishing this series with such a bright warp (and it's even brighter in real life) is that while the solstice has happened, we are entering into the deepest part of winter.  Our summer was particularly grey and dreary, and so far winter has also been grey and dreary.  Something bright and cheerful seems like just the right thing to be doing in January.

But also?  This warp marks the 'end' of the tea towels (for now) as there is too little of any colour left, nor enough of several colours to combine - in a way that would please me.  So with this warp, I declare the end of this series.  Once this warp is done, I will rearrange the left over 2/16 yarn on the shelves which will make room for the next yarn that I will focus on easier to access - the 2/16 bamboo/rayon.

This warp will be my 'bonfire', my 'fireworks'.  My pom-poms of encouragement that the new year come and bring with it a better year for all.

I love all those reds. The towels will be gorgeous!