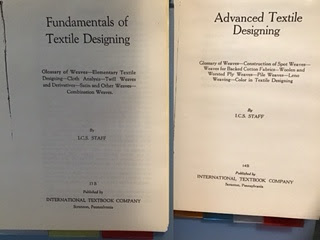 page about double weave from Advanced Textile Designing
I don't remember how I managed to acquire photocopies of these two textbooks, prepared for the textile industry by the International Textbook Company of Scranton, PA, but I remember they were done with permission.  It was most likely through WeaveTech.  The books were no longer in print, and someone with connections was able to contact someone who gave permission for photocopies to be made.  All I had to do was pay for the copying charge and the shipping.
The draft above shows some of the ways that textiles get shown in order to see the path the yarns are taking through the structure.
The 'usual' drawdown is all well and good - until you are trying to show what is happening with multiple layers.  At that point a cross section gives a better picture.
I got these books about the time I was playing with stitched weaves such as pique and double weave and they helped me visualize what the threads were doing, how to select the stitchers - where they should go, how frequent they should be, whether I wanted them hidden or part of the overall appearance of the cloth.
Doing this kind of designing made my brain hurt - but in a good way!
Unfortunately they were enormously time consuming to work out.  I would spend an hour or two every day, trying to work out how to make them work, then let the draft 'sit' until the next evening when I would open the file again and see that it wasn't quite 'right' and edit.  Sometimes it was just easier to begin over again.
During this time I designed coat fabrics, which I've shared before but will do again here: 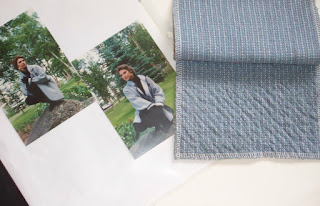 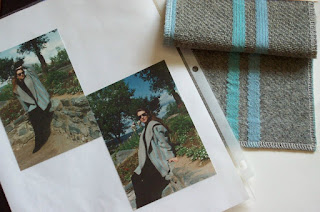 Wool base with cotton stripes woven for design effect.  When the wool shrank, the cotton puckered on the surface creating texture
The top fabric took many hours to get to the point I was happy enough to weave it.  The bottom layer took less time because it was less complex.
Being able to chart the cross section of the cloth helped me see how to make the threads do what I wanted them to do, then I had to figure out how to transfer that passage into a 'traditional' weaving draft.
Weaving software helped by showing me instantly what was happening or it would have taken even longer than it did, if I had to do drawdowns by hand.  Especially the top cloth, with a 1:4 ratio of surface to lining (if I remember correctly - I would have to dig out my GCW files - it might have been 1:2).  The surface was 2/8 cotton woven in plain weave, the lining a 4:4 twill.  The first four shafts were used to weave the surface, the other 12 shafts wove the lining.  The two layers were stitched together in an irregular fashion so that there were not obvious twill lines.  The stitchers were hidden, not part of the surface cloth on view.

I don't have copyright information on these books, but from the style of the diagrams and the text, I am guessing early 20th century.

They are text dense, and the language is of its time, but filled with really interesting information, written for students of textile design.

(PS - these fabrics were woven with a non-computer assisted loom - I had to peg the dobby bars by hand, not just punch in the numbers then let the computer take over the treadling.)

I am so glad you showed these pages, these garments, when you spoke with our guild the other month. I think it blew some minds, in that best of possible ways, to look at the possibilities.

It hurts my brain just to read the description!

The I.C.S. monographs that were bound together in various combinations are mostly available at
https://www2.cs.arizona.edu/patterns/weaving/monographs.html#I
And yes, they are essentially early 20th century, which doesn't reduce their usefulness. A few were eventually updated - I think that the 'Cloth Analysis' in your volume is a combination of the original 'Analysis of Cotton Fabric' and 'Analysis of Wool Fabric', since those two monographs had a great deal of text in common.
Scans of various versions of the monographs, combined in bound volumes, can be found at archive.org. One of those volumes [The Cotton Textile Worker’s Handbook] is the only place I found the I.C.S. pique & Bedford cloth monograph.
Thank you for providing your list of books you have found useful and why - it sent me down the rabbit-hole of tracking down these monographs!

Thank you. I acquired these back in the 1990s. Good to know they can still be found.