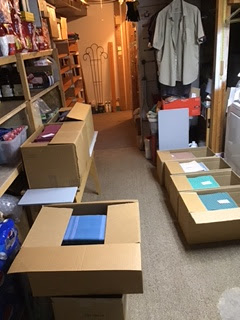 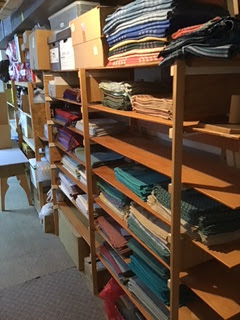 put out on the shelves
For the past week or so Doug has been working on the new pantry area in the laundry room.  Last year this time, he installed this wall of shelves which we filled with the overflow from the annex.
As the pandemic hit and we started to lay in a small back stock of  food and cleaning supplies, we ran out of room upstairs so he suggested taking some of the new shelves to use as our overflow pantry area.  Flats of canned food, toilet paper (bulky), kleenex, hand sanitizer and so on.  As the weeks wore on, we realized my access to non-allergenic food might become insecure so we started slowly building up some inventory of things like Wasa bread (which I can eat), and other things like the tuna packed in water (no spices!) and so on.  As we built up our winter reserves, the studio stuff began to be moved elsewhere.
Some things I had to just bite the bullet and get rid of.  Other things got re-packed to take up less room.
Doug claimed more of the shelves for pantry and decided to strengthen the shelves which were not originally meant to carry much weight.  While all my inventory was at the guild room was the perfect time to do this job because it was out of the way.
On the 20th, we packed up my stuff from the guild room, but he was still working on the shelving so the boxes of textiles rode around in the back of the van until yesterday when he brought all the boxes in and after a Zoom meeting I unpacked the boxes and crammed everything back onto the shelves that are to be dedicated to storing them.
However.  During November and December I continued making more tea towels.  There is another shelving rack in the studio proper filled with tea towels that need to be tagged/priced and then moved in with the rest of the inventory.  I suspect they won't all fit.
So the plan is to begin photographing them and listing them in my ko-fi store.  I'm waiting for the holiday mail rush to be over. Canada Post was slammed and run off their feet.  I really didn't want to add to the burden by trying to sell and ship towels!
This week I will finish the grey/blue and put the red/orange into the loom and that will be that for tea towels.  For a while.  I have more yarn (lots more yarn!) to use up and a new scarf design would be good.  Scarves also don't need to be hemmed.  They do, however, need to be fringe twisted.  I'd actually rather hem than fringe twist, but...gotta do what is necessary.  I am also low on shawls, so I might do another shawl warp at some point.
But it took me a year to use up my 2/16 cotton inventory.  I expect it will take quite a while to use up my rayon inventory.  While I don't have nearly as much 2/16 bamboo/rayon, I do have quite a bit of various kinds/types of rayon so the plan is to put on the 2/16 bamboo as warp and use up as much of the Tencel and various other kinds of rayon in my stash as weft.
I think that's 2021 sorted...
Posted by Laura Fry at 11:15 AM