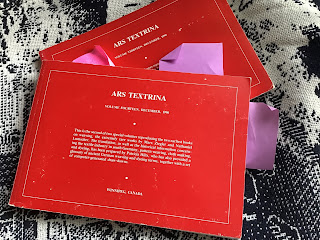 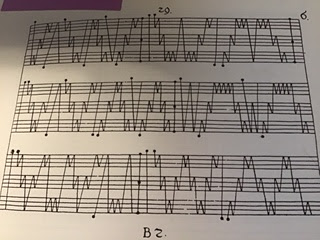 Ars Textrina was a scholarly publication that dealt with the history of textiles and as such was expensive.  I bought every issue until I could no longer afford them, but they stopped publication soon after anyway.

A few years ago (quite a few now, man, am I ever *old*!) I needed money quite badly, had run out of space on my shelves for my library and realized that there were a bunch of books that I simply wasn't using.  So I started the Great Library Cull.  I knew that these volumes were prized by many people and rare as hen's teeth, so I decided to sell them all - except for these two.

Patricia Hilts had somehow found a couple of old German manuscripts - weaver's pattern books - and translated them, putting them together for Ars Textrina.  She did computer generated diagrams of the weave structures - thumbnails, as it were - and included the threading and tie up drafts.

The drafts can be woven in a variety of ways, of course.  I have frequently used them as 'fancy' twills, playing with the tie up and treadling to get a variety of different designs all from the same warp (also changing the weft, just to add colour into the mix).  Lately I've been using them as twill blocks.

At any rate, because I have 16 shafts, I have been extending the threading draft into 16 shafts instead of 12.

There are several threading drafts given per page, no doubt to save paper.  To read these, the designs are divided by the long (more or less straight) line with the dot at the top, bottom and the middle.  The squiggle with the dot at the end of the M or W is the end of that particular threading draft.  (or the beginning if reading from left to right)

It took me a while of playing with the progressions in Fiberworks, seeing what happened when, before I got the hang of it.  And then I just got carried away playing with them.

During the Cull, I decided I used these two volumes far too frequently as a resource and kept them, even though I knew I could have gotten quite a lot of money in the eBay auction I was running getting rid of the books I had decided I could live without.

The more I worked with these (and other) drafts, the more I understood how to make the threads do what I wanted, where I wanted, when I wanted.

And I give thanks to Bob Keates and Ingrid Boesel whenever I do a deep dive into a weave structure for designing/developing Fiberworks weaving software (and all the rest of the software designers for developing .wif so that drafts can more easily be shared amongst the various programs).