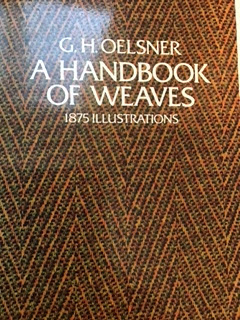 G. H. Oelsner first published 1915, then reprinted by Dover in 1952.  It says it was translated, and I am assuming from German but don't know for sure. 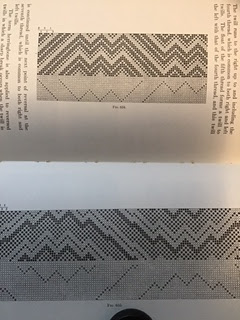 threading below, draw up above, tie up notated in the top left corner - draft was turned 90 degrees to fit on the page - two drafts shown one on each page 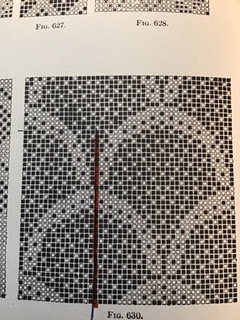 draw down with the tie up noted by the tiny hash marks, which I have made more obvious by drawing in the vertical red line.  Threading is point progression.
Oelsner's book is one that you really need to read the text to find out how to understand the various notations used in the book.
Sometimes threading drafts are given, sometimes tie ups are, or sometimes, like with the last draft, the tie up is indicated within the fabric structure.
As the weave structures change, sometimes the notation changes because sometimes the information is not as transparent and needs to be indicated in some way.
So the upper draft gives the threading and how the cloth will look when woven in a twill and the twill tie up used is in that tiny little line at the top left.  It is one way to show how a twill should be executed.
For four shafts a twill can be indicated thus:
1
---------
3
or
2
---------------
2
or
3
--------
1
You read it by noting that in the top graphic there will be 1 warp thread up and three left down to form the shed and the weft will pass between them.
The tie up then becomes
shaft 1 is tied to treadle one
shaft 2 is tied to treadle two
shaft 3 is tied to treadle three
shaft 4 is tied to treadle four
The characteristic of twill is that each pick will move up and over by one thread. 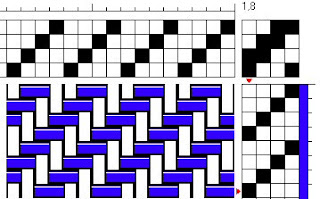 The middle one would be our 'standard' two-two twill, shown above, and the bottom one would have three shafts tied to each treadle to lift three and leave one shaft down.  (all for rising/jack type looms - reverse would be true for sinking/counter balanced looms.  For countre marche or counter march looms, the notation tells you which shafts are to be raised, which to be lowered.)
This is another dense book that requires some study to fully understand what is contained in it.  Many people assume it's just twills, but it goes beyond 'just' twills and into some other areas that can be quite fascinating.  It has weave structures for many different numbers of shafts and some are not well known.  Maybe one of these days I'll take a dive into the back pages and see what wonders they hold.

In the meantime I browse through it looking for interesting things like the scallops in the third draft, based on satin and which I have woven in a number of different yarns and densities.

A number of years ago I culled my library (I wasn't using some of them and I needed the money so I sold them) but I kept some of the books that I use routinely for inspiration.  While I may not use this one frequently, I do use it often enough that I would miss it if I couldn't find it.