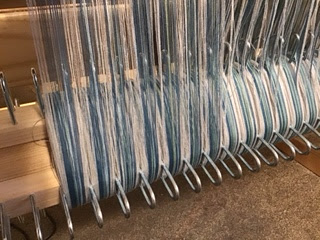 When I talked to a friend about burning through my yarn stash, she reacted with astonishment and lots of praise.  For one thing, she had actually seen my yarn stash when she visited in January of this year, and, being a spinner, was also well aware of the volume of yarn I had and how many yards that represented.

So when I mentioned to her yesterday that I was nearly out of 2/16 cotton, she shook the pom-poms of encouragement and appreciated how much work using up that amount of yarn entailed.  She's also a weaver, so she truly understands the work involved.

This morning I started wondering exactly what that would look like, so I did the math.  The numbers include the two warps still to be done - the blue/grey currently doing into the loom and the last one pulled, ready to be woven as soon as I can get this one off.

So.  2/16 cotton.  I didn't do an inventory before I started, just plunged in but given the overflowing shelving rack, crammed cheek by jowl with tubes, I have no doubt about the veracity of the following numbers.  2/16 cotton has approximately 6720 yards per pound.

Tea towel warps with about 780 ends per warp (this varies slightly depending upon design).

Weft based on about 1200 picks per towel (again this varies slightly depending upon design) - each towel has about 930 yards of weft and I have been averaging 18 towels per warp for a total of 16,800 yards of weft or about 2.4 pounds.

Since March (including the two in the pipeline) I have done 20 all cotton warps.  (Prior to March I was weaving the linen on cotton warps so those are not included here.)   2.3 plus 2.4 pounds is 4.7 pounds per warp for a total of 94 pounds of 2/16 cotton woven.

On the current warp it was a bit of playing yarn chicken but in the end the pale green went further than expected and I only had to start cutting in the pale blue for the last few inches.  So these towels will have a small border down one side where the green begins to run out and the blue gets introduced.

And you know what?  It's fine.  They will still dry dishes.

Can't remember if I posted my current book - Firewall by Henning Mankell who writes the Kurt Wallender mysteries (among others).  I wasn't sure if I was going to enjoy them because I tried watching the tv program based on the books and found them depressing.  But so far the book has been full of twists and turns and hasn't been too atmospheric.  Having been to Sweden and visited various places there I can 'see' the landscape and sometimes the public spaces mentioned.  I 'discovered' the Per Wahloo books back when he was still writing and enjoyed the landmarks of Stockholm.  The Wallender books are centred around Malmo, which I have travelled through but not spent much time in otherwise.  Anyway, I'm intrigued enough I requested another title from the library.  They don't have the complete series in their collection and inter-library loan is currently suspended but I don't think it much matters if these books are read in order or not.

Wow. Just WOW! That’s A LOT of yarn and A LOT of weaving!! Very impressive!

Phew, that is a lot of weaving. Good for you for decreasing your stash. I’m a spinner, not a weaver, but I know we all have stashes that need using, otherwise why were they accumulated in the first place?

I can completely identify with the 'need' we have to use up our stash. I'm a tatter, not a spinner or weaver, and I think in 'grams' instead of pounds (5-gram and 10-gram balls of fine thread, 20-gram balls of larger threads, usually). A 'large' spool of fine thread may be 300 yards or 500 yards at most, and it takes a long, LONG while to use it up. Your tea towels must have MILES of yarn in them....and it's the really fine stuff, at that! Your weaving (and stash reduction) is impressive and the weaving in progress/finished is beautiful.
StephanieW