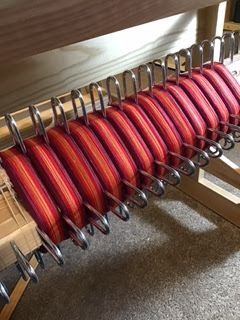 Textile folk say that if you are concerned you don't have enough yarn and yet go ahead and begin your project anyway, you are playing the Yarn Chicken Game.

Now that I'm on the dregs of my 2/16 cotton, I tussled with the concept that perhaps, just maybe, pretty sure, I was going to run out of the scarlet red for this warp.  Since I would rather have fewer towels than narrow ones, I made the decision to beam a warp about 5 yards shorter than I have been doing.

I hit the halfway mark and decided to take a break, checked the tubes of scarlet red and yup, pretty sure I would have run out at the previous length.  So I think I'm good to go with this warp.  And this will be my last tea towel warp of this series, and for now.  Because I have other stuff that wants doing, as well.

But this fabulous RED warp is a good one to end on.  I toyed with this combination since August when I saw I was beginning to run out of options.  Yes?  No?  Maybe so?  In the end I pulled enough tubes to beam the warp, left the bin in a corner of the studio where I would see it out of the corner of my eye, and over the weeks and months became comfortable with this unusual red/orange combo.  OTOH, it's perfect to end the year with.  Plus I have a couple of friends who just love the colour red and could most likely use some tea towels, so even if they don't sell they will find a home somewhere.

It won't take as long to weave off and I may be done sooner than I expect.  Or I may keep the end of it to demonstrate on for a Zoom meeting I'm doing on Jan. 10.  Goodness knows, I do have another loom, AND a warp already wound (for a year, no less) that can be woven on that other loom.  In fact I wouldn't want to weave that place mat warp on the Megado anyway, because that warp requires a really hard pounding, and the Megado hasn't been built for that kind of punishment.  I might even do a few mat warps because guess what?  I have several shelves of 2/8 cotton, too.  And it all needs using up at some point.

I don't know if it is the string of really dreary days, the unseasonable weather, the short daylight hours, but I have really been struggling with feeling tired.  All The Time.  Maybe staring at this brilliant warp to weave it will help give me some energy.

Regardless, I am looking forward to finishing this series and moving on to something else.

Here’s hoping that the cherry reds/oranges warp will make the ‘string of really dreary days’ disappear, at least emotionally, if not physically.

You intended that play on words, right?

I think the soft animal in us wants to crawl into a dark cozy den and hibernate when it is dark and wet and generally unpleasant. What better place to do that than with a fire-red warp in your studio!