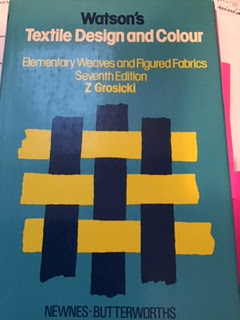 pink post-it notes poking out the side 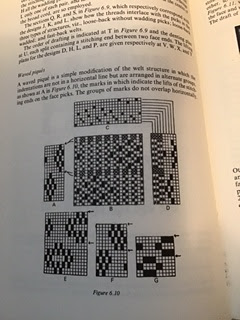 an explanation of pique by breaking it down into its parts
First published in 1912 (according to the info in the book) Watson's Textile Design and Colour has been updated frequently throughout the 20th century.
I discovered the book in the 1980s I think and immediately bought a copy.  If I remember correctly there are two volumes, this one addressing 'elementary and figured fabrics'.  I might even have the other book, but my hand fell on this one this morning.  (I have quite a few old time books and sometimes I forget exactly what I have until I go rooting about on the shelves!)
Once again, you really need to read through the text to discover how the author is representing the information being conveyed.
The above draft shows pique, which has at least two layers, sometimes a third stuffing warp or weft. 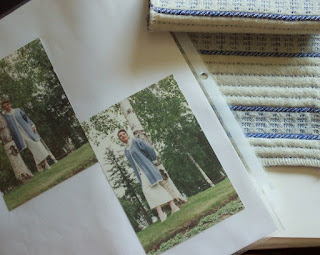 combo of pique and stuffed double weave. white layer wool, blue layer hand dyed silk
This draft breaks down the various weave structures that go into creating the cloth - a two dimensional representation of something that is actually three dimensional, and therefore very difficult to sort out what goes where and how it will actually look once woven.  Notice that there no tie up box - instead what is shown is a liftplan.
Again, this book is text dense, but it also has lots of diagrams and covers a lot of ground in terms of the possibilities of what is called 'elementary'.
The book was published in England, so some of the terms are British English weaving terms.  It is also dated in its language being first published in 1912.  This is one of those books where the extensive index comes in handy so that I can look a topic up and then just read (chew) through that bit of information.  Then I go to the weaving software and see if I can work the structure into something personal.  I won't say unique because someone, somewhere, has likely done it before.  I follow the Elizabeth Zimmerman path of never claiming something is new, never-been-done-before, but that I have simply re-discovered or 'unvented' it.
A weaving draft is just a set of possibilities - of potential.  It is what the weaver does with that potential - the density, colours used, the arrangement of the threads, expanding or contracting the size of the blocks (if there are blocks), that insertion of the weaver/designer's personality and vision, that makes something different.
More shafts mean more complex cloth can be woven more efficiently.  But before there was technology, there was a weaver with a sword or pick up stick, making the threads go where they wanted them to go.  Understanding the path of the threads through the cloth is the key.  How one physically gets them there is just a matter of mechanical assistance.  To this day there are weavers who use a backstrap loom and pick up every shed with a stick and - using what some people consider to be very simple equipment -
create textiles of great complexity and sophistication.  It is not the tools but what the weaver does with them.
Posted by Laura Fry at 10:45 AM

This is one book I've not ever heard of. Thank you for the reference! It's now on my Christmas wish-list, because I don't need more stash. Books are ALWAYS welcome friends :-)